It's that time again! Head over to Jo's blog to find out where to start the Halloween mystery phrase. Once again she's hosting so we can have a little fun over Halloween, even if you don't celebrate it much. We can check out everyone's spooky or fall stitching and add to our wish lists.

I managed to finish off the new Durene Jones SAL before Halloween! It's not fully finished (quelle surprise!) but I have an idea, so hopefully it will be before next Halloween at least. Here it is: 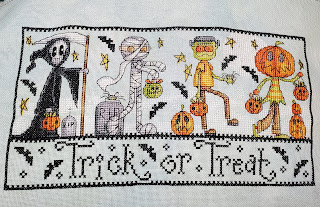 Halloween SAL by Durene Jones
stitched 2 over 2 as charted on 28ct Poseidon by Chromatic Alchemy
And if you're ready for your letter, here it is: 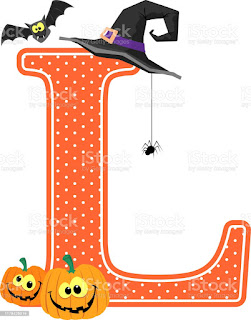 And please continue your journey over at La Coeur Celtique and visit the lovely Mary!

Hello again! It's been an eventful month, and there's been a decent amount of stitching despite everything else going on. I had plans to post weekly in October, but clearly that didn't happen, so once again, it's a bit of a catch-up post.

If you check back to this post, I talked about what I hoped to work on in October. I've stuck with the basics of that post, but got a bit derailed because I also have a new start! Yes, despite the planned 4 new starts for Naughty November. It's so fun though, I had to start.

First, I managed a couple small finishes that had been hanging around: 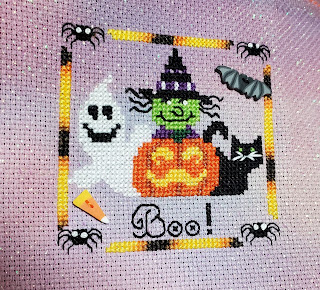 Boo! By Brittercup Designs stitched 2 over 1 as charted except the border in WDW Trick or Treat
on 14ct opalescent Galaxy by Jodyri Designs 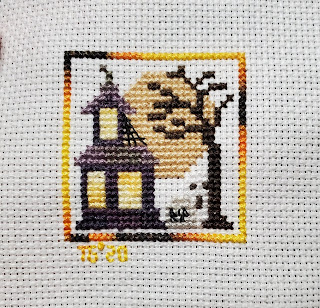 Haunted House by Heart in Hand, stitched with stash threads 2 over 1 on 14ct scrap aida
Two solid finishes is a good way to start. This was all on October 1st, and I even had a little stitching time left to get myself started on my first Dark October WIP. 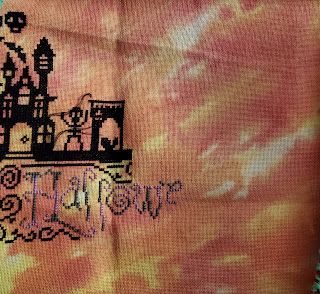 and after a little spelling mishap: 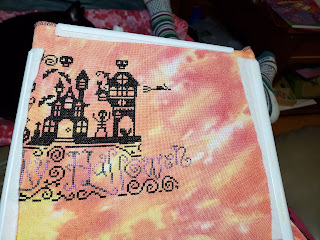 I managed to get a little more completed: 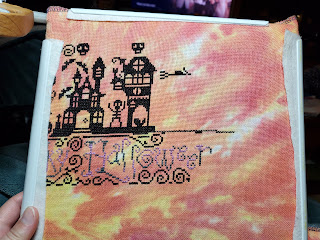 Spooky Halloween by Durene Jones (Lakeside Needlecraft SAL)
stitched 2 over 2 on 28ct Icarus by Chromatic Alchemy
And speaking of Durene Jones, she had the audacity to come out with a free SAL right after I'd had all my plans laid out! It's on her Facebook page here. 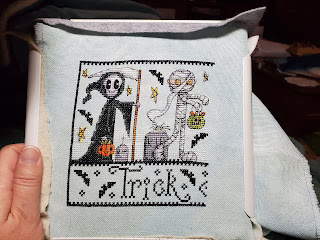 Durene Jones 2020 Halloween SAL Parts 1 and 2
stitched 2 over 2 as charted on 28ct Poseidon by Chromatic Alchemy
After I spent a week (or less) on Spooky Halloween, I pulled out In the Gloaming to see what I could accomplish despite being distracted by the shiny new SAL. This is where I started: 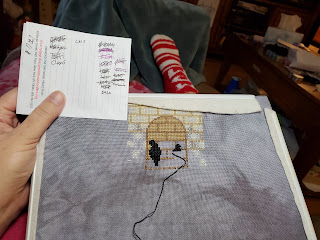 and after a week, I managed to start on the gate. The first page (of 2) is complete, which is a nice feeling. I really don't think this would take more than a solid week of stitching to complete since it's very few colours, but best laid plans, etc... 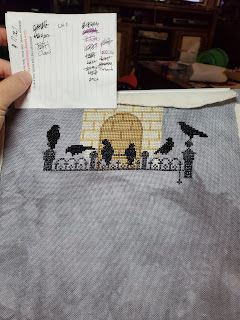 In the Gloaming by Whispered by the Wind
stitched 2 over 2 on 28ct Mirage by PTP
I've also started part 3 of the Durene Jones SAL, which has kept me from starting back on my third Dark October WIP. Here's where I'm at now, just need some back stitch and I can get a couple days into Witch's Gate. 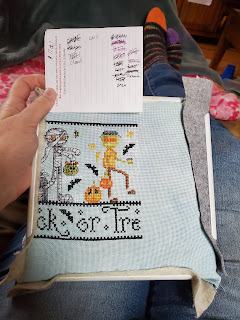 The last part of the SAL will be out on Friday, October 23, so I will have some time to work on Universal Monsters SAL as well if I can finish up part 4 a little quicker than I've managed with part 3.
I hope you're all well, and apologies for the numbers, etc. on the photos. I decided I would just get the post up for goodness sake instead of fussing as much making everything perfect. I'll work on the photos next if I can.
Stay well, and Happy Stitching!
Tiffstitch

I'm a little late posting about the end of the September event. I'm sure you're all very surprised by this with my sporadic blogging in the last couple years.

I really enjoyed this event and it was great to get some good stitches into some WIPs that haven't had much attention in the last year or more.

First up is yet another dragon project. For Project 13 I picked up Do Not Meddle because it also has dragons, like Mini Winter Magic (Project 12). I started here: 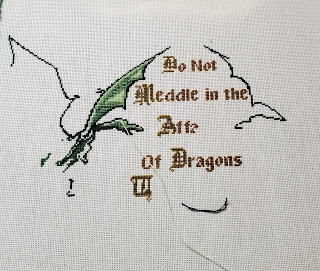 and although I only needed to stitch 1300 stitches, I ended up stitching 1420 because of some other FB games. I ended here: 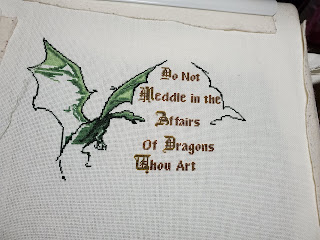 If anyone remembers this one, I'm stitching it for someone that can't stitch much any more and I'm taking much too long getting it completed. I'm glad to get almost one half of the dragon complete, so hopefully I can get this one out again and get some more progress.

For the next project, I linked them by saying I'm also stitching it for someone else. I chose Princess and the Dragon so I can get a little more done on it. It's so close! Here's where it was: 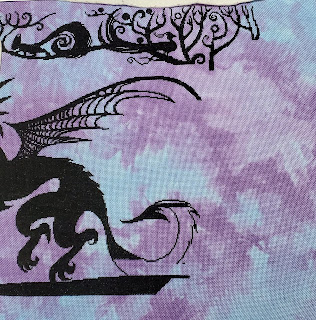 another 1410 stitches gets this moved along to here: 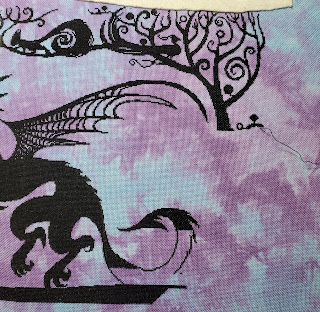 Unsurprisingly, I had yet another dragon project I wanted to work on. This time I linked them through the fact that each dragon has a hoard. The above one has a hoard on the far left of the project, and this newer project you'll see some of it on the end point. Here's where I started on Project 15: 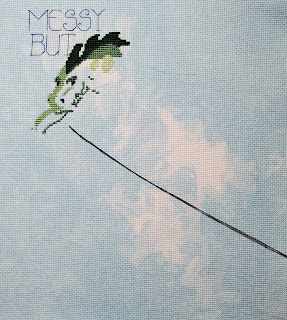 and after 1500 stitches, this is fairly close to a finish: 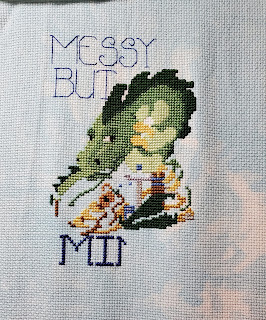 I feel like I need to go through my WIPs and see which ones just need about a week to finish. I feel like there's a fair number of them now and maybe that will be the December plan. Focus on a finish for as many as I can. This next one won't be in that category. It's still years away. And that is Bailey Basset. Those with good memories may note that I did make it to 16 projects this month, which is one more than my goal of 15. I'm very happy with that. I linked to this next project by saying I'd like to have a dragon as a pet, and I did have a basset hound as a pet. Here's what Bailey Basset will look like some day, and where it started: 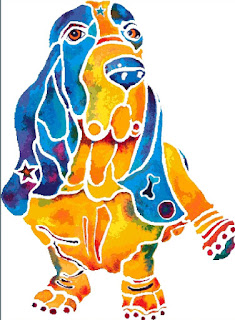 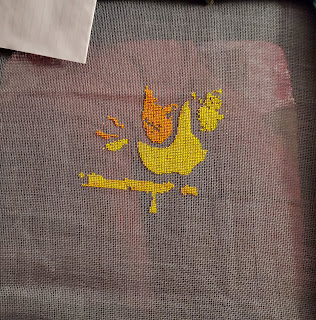 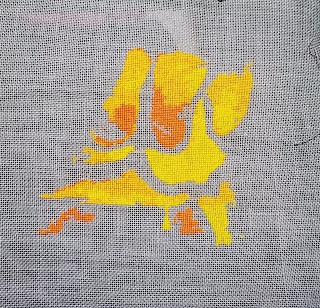 And there we have it! The end of the September event and lots of stitching completed on several neglected WIPs. It was a thoroughly enjoyable event and I will definitely participate next year. Hopefully it won't be all the same projects. :)

I hope you're all well and Happy Stitching!

Yay! I'm so happy to report I managed a finish on In the Gloaming! Despite the trials and tribulations with getting the colour scheme c... 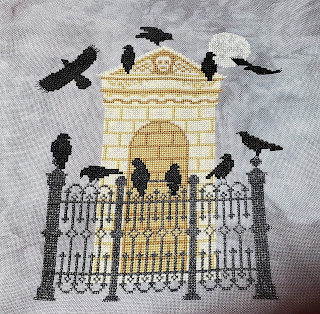