Hello again! It's the final day. For today I've saved one that I technically started before May even began. I finished my April goals, 2K on Animal Kingdom and finished 5 WIPs, some of which had been hanging around for several years. I ended up with a couple days left in April which wouldn't quite be enough to finish anything else, so I stared a new project that I was really excited about.
If you're not familiar with the Etsy shop Taylor and Cromwell, I've linked to it here for you. They have a lot of really interesting patterns, and many of them are word-related. We all know I have a tendency towards those patterns, and so many of theirs have fandom aspects. There are several Broadway shows, book series, all kinds of things. 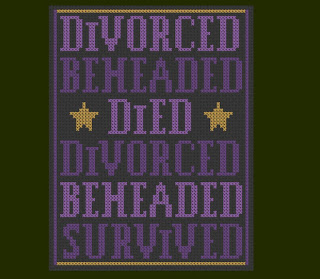 from Six the Musical 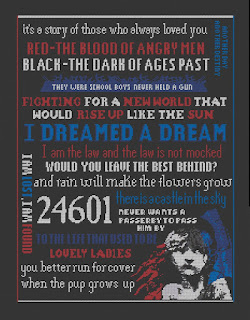 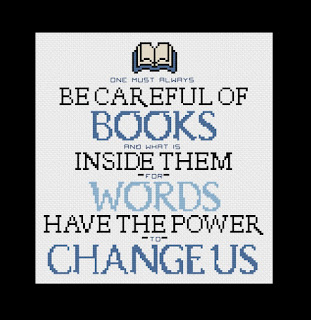 from the Infernal Devices series of books
And, the best part is, they offer custom designs. For only $15USD. That was well worth it for me to request a custom design of one of DH's and my favourite book series, the Stormlight Archive by Brandon Sanderson. I linked to t he Wikipedia page if you're interested in an epic fantasy series. There are 4 books so far, and each one keeps getting better.
I chose 10 quotes and the designer even added a special aspect to the chart, the special swords some characters use. I hadn't requested anything like that, but it definitely adds to the project. Here's the mock-up: 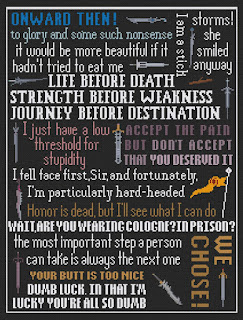 I can't even tell you how much I love this! It's just perfect and fits the series so well. The quotes that should be more emphasized are, and the addition of the swords and flag, excellent! So, if you're interested in something similar, look for their custom listing. It's well worth it. My start is here: 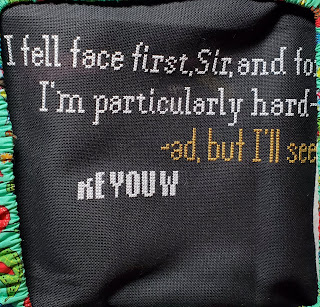 Stormlight Archive quotes by Taylor and Cromwell
stitched 2 over 2 on 28ct black Monaco
with DMC as charted
I had a good piece of 28ct black Monaco sitting around that fit the size perfectly. And this works in Pattern Keeper! Even better. I think I had to add the DMC colour numbers, but the chart was easy to enter into the app.
I think this will be one of those that I keep coming back to until it's finished, like Princess and the Dragon. It will get worked on every month. I doubt I'll have a finish this year, but definitely before the 5th book comes out. He takes a few years between each one, and the 4th one only came out last fall, so I have some time.
I have no association with Taylor and Cromwell aside from the fact I was really pleased with this and the interaction with the designer. There was one change that had to be made in the design and that was done quickly and without any fuss on their end. They also have a Facebook group where they post some freebie patterns if you want to have a look.
I hope you're all staying healthy and enjoying your stitching. Stay well and thank you for making it through this month with me.
Happy Stitching!
Tiffstitch
By Tiffstitch - May 31, 2021

Email ThisBlogThis!Share to TwitterShare to FacebookShare to Pinterest
Labels: stormlight, taylor and cromwell

Here we are at Day 7! That means a week since the Opening Ceremonies, and if you haven't had a chance to see the pictogram section, I fo... 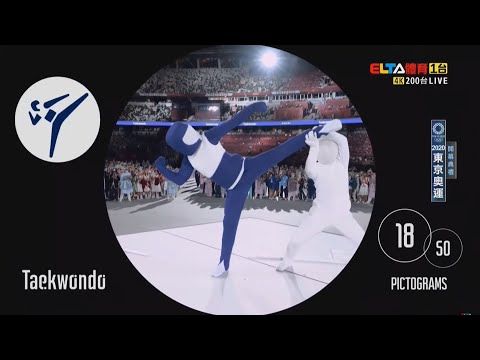