Stitching Sunday - To Frog or Not to Frog

I was doing really well on Midnight Manor until I realized I was off half a stitch on everything on the left side, except the Jack O'Lantern since that was based off of the Manor itself. 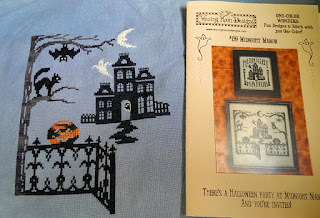 I was frustrated with myself since I thought I'd been careful with the moon and how the branch lined up. But I got to the Jack O'Lantern and it was floating one half stitch above the gate. The decision to frog or not to frog didn't take me too long though. I was not up to re-stitching the entire tree and cat and bat.

I added a line of 2 over 1 under the Jack O'Lantern so the gap wasn't as obvious and continued on.

I had Friday and Saturday off and I was able to stitch a lot because DD kept playing by herself and I got all my chores done while she was playing. She was in a fantastic mood those 2 days and it was nice to be home with her. DH is still recovering from a weird heat exhaustion/flu type of thing so DD and I spent a lot of time together.

I also started wearing my reading glasses when I stitched and I think that helped me progress a little faster too. Less squinting and it's easier to read the chart. It made the CFL games on ESPN3 a little blurry, but good enough.

I hope everyone else had a great weekend, happy stitching! 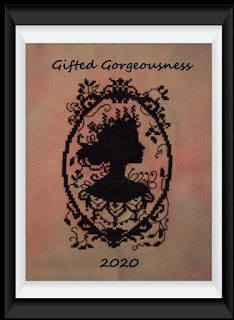